Prince Charters, Ltd, was originally founded in 1965 by Captain Doug’s Grandfather, Dr. Gilbert Prince. He was an ordained minister with a genuine, lifelong passion and love for the sea.

As a boy, Captain Doug would hear tales of his grandpa’s sailing adventures. At age 12 he was given his first opportunity to crew on a sea burial. From that day on he had a passion to follow in his grandpa’s footsteps and continue the family legacy of Prince Charters.

Captain Doug now has more than thirty years experience sailing in Southern California. He holds a United States Coast Guard Captain, 100 Ton Master Mariner License and is CPR & First Aid Certified. His expertise will provide you with a day of fun and a lifetime of memories.

Captain Doug’s vessel, is a 42’ Catalina Mark II and is fully equipped with a roomy cockpit, galley with fridge/freezer, microwave, two private sleeping cabins and two heads (one en-suite with shower). For your comfort, there is a large dodger to keep you warm and dry on those very windy days. For your safety, our vessel is outfitted with GPS, autopilot and radar for night sailing and foggy conditions 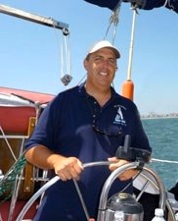